Some mornings I would wake up feeling fully energized, all ready to take on the baking world come what may! And what would seem as a really promising start to the day would often end up with me crashing onto the sofa, browsing recipe books and bookmarking more and more recipes and simply adding on to my endless list before the hours pass by with me NOT doing any baking at all. I've bookmarked so many types of local Chinese pastries that I have been wanting to make for a long, long time, but each time I read about the process of making them, I get lazy. I'll be thinking about which pastry to try first, whether this or that, whichever is easier perhaps, and that's about all that I do, most of the times.

The wise and enlightening Ajahn Brahm, an Australia-based English monk, shared a story in his book 'opening the doors to your heart' that one day many years ago as a young novice monk in north Thailand, he and his fellow young monks were asked by senior monks to move a huge mound of earth from one ground site to another in the temple grounds. After shoveling for a few days, the deputy chief monk had come to inspect and asked them to move the earth to another spot instead. And so they did, although not without some complains. When the chief monk returned from his trip, he told the junior monks that the earth was at the wrong site and that he wanted all the earth moved back to its original spot. This infuriated and annoyed Ajahn Brahm even more than the second time when they were asked to move the earth. He thought, can't those senior monks decide once and for all and agree? Aren't monks supposed to be organised?? He was really angry (since he was a novice monk who hasn't fully cultivated his wisdom yet) as he thought about the long suffering few more days, having to shovel with aching muscles. One of his fellow monks, noticing his continuous grumblings, then came over and said to him "your trouble is you think too much!". It then dawned upon him that his monk friend was absolutely right! The more he thought about the work, the heavier his shovel felt. From then on, he learned his lesson that thinking about moving the earth was the hardest part, moving it was easy. To this day, he suspected that the senior monks had planned it as it was to impart a wisdom to the young monks through their own experience. I love this story! And if I had read it sooner, I would have attempted more pastries! I would have thought less of the pastry-making process and just get to doing it. But, better late than never! So finally yesterday, I used this priceless lesson that the hardest part of anything is thinking about it, and I got round to stop thinking and start doing. So I made one of my many bookmarked pastry recipes, spiral curry puff. And true enough, the doing part is, really not that hard at all! 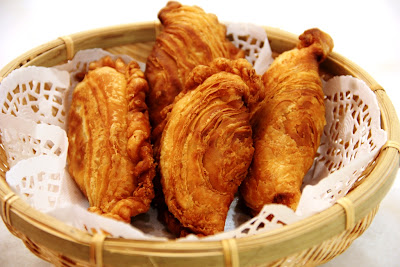 I made the doughs here based on a recipe in "delicacies of china town' book, authored by a lady but unfortunately I don't know her name as it was written in Chinese characters. Luckily the recipes are in dual languages. There are several versions for the dough recipes as I had seen online and in some blogs,  but essentially, the concept is similar to french puff pastry where dough and fat are inter-layered to get crispy light flaky pastry. The spiral effect here is achieved by rolling the two types of doughs (water and oil doughs) into a rectangle and rolling it up into swiss roll. Step-by step explanation is as below. 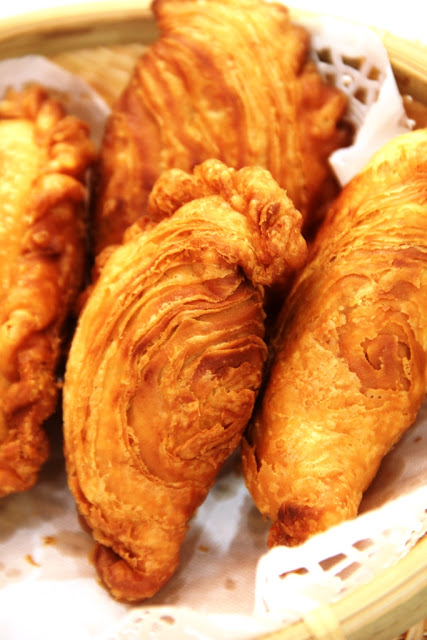 First up, prepare the filling as below. It can be made days or weeks ahead. Freeze it in a tight lid container and thaw completely before making the puffs.

(if you had read this filling recipe earlier and again now on 140712, you'll noticed that i've made changes here. previous measurement was for a portion of the dough only and wouldn't be enough if you follow the full dough measurement below. please refer to this new filling measurement. this is an estimation and depending on how thick/large your dough wrapper is, you might get a little leftover filling or dough)

Now, with the filling all ready, here are the recipes for the two types of dough.

Mix water dough ingredients and knead to form a dough. Cover with kitchen towel and leave to rest for 30 minutes.

Mix oil dough ingredients and knead to form a dough. If the dough is too soft, add a tablespoon of flour.


With both doughs ready, here are the steps to achieving deliciously light, flaky and crispy spiral puffs. The amount here will yield about two dozens medium-sized puffs. 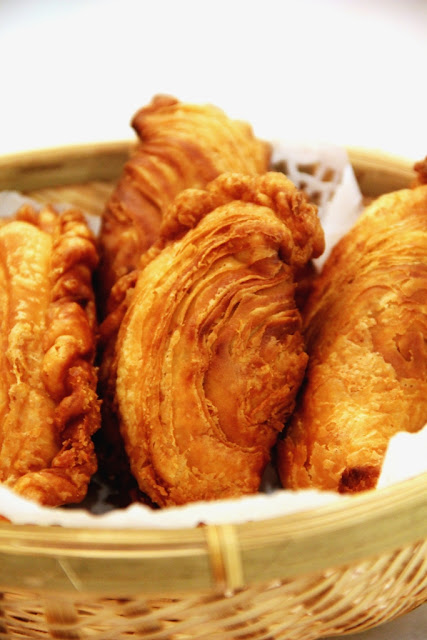 Posted by petite nyonya at 2:23 PM