Among my fellow Malaccans, semolina or sugee/sooji cake is believed to have been introduced by the Portuguese community in Malacca and has now become a favorite butter cake for many, especially the Peranakan/BabaNyonya families here. The Portuguese people in Malacca are descendants of their forefathers who sailed thousands of miles to South-east Asia in search of spice trading routes which resulted in an era of Portuguese colonization of Malacca during the 16th century. Like the BabaNyonya community in Malacca, the Portuguese community still retains its own cultural identity, Kristang language and famous cuisines.

There are many recipes for semolina cake but as I'm aware, often times each Peranakan family has their own secret version that was passed down by grandparents or parents who had earlier learned it from their Portuguese friends of their generations. Personally, I have 4 different recipes for semolina cake, in which 2 are considered 'secret recipes' passed down from earlier generations - one from my late Mom and the other from a dear Peranakan friend who is currently residing in Toronto and who inherited his family's secret recipe from his mother.

Basically, semolina or sugee derives from wheat and is great for making cakes and desserts. It's a popular ingredient for making Indian desserts too. Semolina cake has become very popular these days and many recipes are easily obtainable. Many love it for its rich buttery aroma and grainy texture which gives one a delightful eating taste. Since semolina cake is absolutely delicious and too good not to be shared, here is a wonderful recipe which I had cut out from a women's magazine a couple of years ago. My family loves semolina cake and I made this for them last week for our Chinese New Year get-together in Malacca. I decided to 'dress it up' with chocolate frosting and basic CNY-theme deco. I'm no expert at cake deco and this was made in quite a rush, thus the molding of the God of Prosperity (Cai Shen) was, as you can see, wayyyy less than perfect (thus, no close up shot of it..;). Well, it doesn't matter since the taste is in the cake and the crumbs were all wiped out by my nieces and nephews! 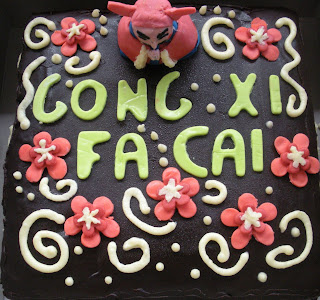 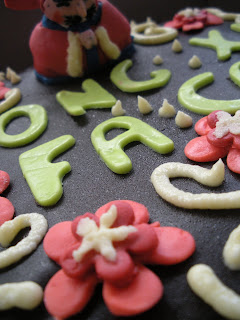 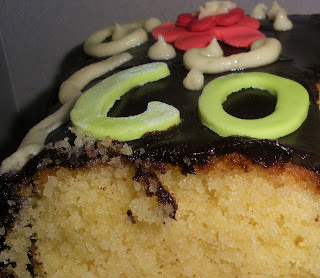 Sift flour and baking powder into a bowl and stir in semolina and salt. Mix well.
Beat eggs, milk and vanilla essence together in a bowl.
Cream butter, sugar and honey till light and fluffy. Gradually trickle in egg mixture, beating constantly. Mix in flour mixture on low speed and stir till well combined.
Spoon the batter into an 8-inch cake tray lined with baking paper.
Bake for 45 minutes at 150 deg C or until an inserted cake tester comes out clean.
Cool cake for 15 minutes, then unmould and let cool.
Decorate as you like or have it as it is. Best served with a cup if tea.

Posted by petite nyonya at 8:45 PM